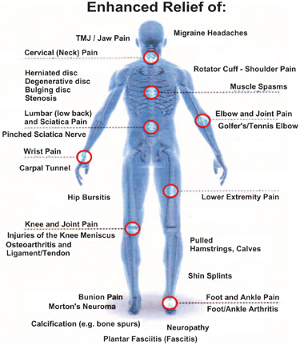 If you are suffering from:

It's the most advanced, natural pain relief available.

Multi Radiance Medical laser therapy is completely safe but you must follow the manufacturer's instructions and be aware of all contraindications. Read the device operating and protocol manuals before usage. Multi Radiance Medical devices have an FDA Clearance and CE certification, a mark of European safety and legal compliance.

There is little or no sensation during treatment. Occasionally one feels a mild, soothing warmth or tingling.

How long does a treatment take?

The typical treatment duration is 5-15 minutes depending on the size of the area being treated and the condition being treated.

How long before results are felt?

You may feel an improvement in your condition (usually pain reduction) after your first treatment. Sometimes it may take longer. This does not mean nothing is happening. Each treatment is cumulative and results are felt often after 3-4 sessions.

Can it be used with other forms of treatment?

Yes, Laser therapy is often used with other forms of therapy including Physical Therapy, Chiropractic, adjustments, and massage; it is often used after surgery too. Other healing modalities are complementary and can be used with laser to increase the effectiveness of the treatment.

What about Visual Safety? Are my eyes safe when using laser therapy?

A person should never look directly at a laser emitter or any similar light source for more than 30 seconds. Multi Radiance Medical laser therapy devices are designed to low power specifications with maximum attention to eye safety. Whether or not you decide to use the safely goggles is largely the matter of personal preference and comfort. 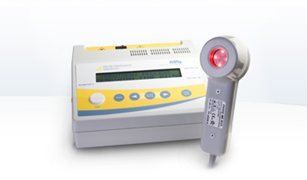 What is laser therapy?

L.A.S.E.R. (Light Amplification by Stimulated Emission of Radiation) is a name for a type of intense radiation of the light spectrum. A laser is a beam of light in which high energies can be concentrated. Laser light has unique physical properties, which other types of light do not have. These are coherence and monochromaticity. These are what makes laser light is so effective compared to other kinds of light in the field of pain reduction and healing. Laser therapy (also known as phototherapy and low level laser therapy) involves the application of low power coherent light to injuries and lesions to stimulate healing and reduce pain. It is used to increase the speed, quality and strength of tissue repair, resolve inflammation and give pain relief. Laser therapy has been found to offer superior healing and pain relieving effects compared to other electrotherapeutic modalities such as ultrasound, especially in dealing with chronic problems and in the early stages of acute injuries. Laser therapy is a complete system of treating muscle, tendon, ligament, connective tissue, bone, nerve, and dermal tissues in a non-invasive, drug-free modality.

How does it work?

The effects of laser therapy are photochemical. Photons enter the tissue and are absorbed in the cell's mitochondria and at the cell membrane by chromophores. These chromophores are photosensitizers that generate reactive oxygen species following irradiation thereby influencing cellular redox states and the mitochondrial respiratory chain. Within the mitochondria, the photonic energy is converted to electromagnetic energy in the form of molecular bonds in ATP (Adenosine Triphosphate). In order to interact with the living cell, laser light has to be absorbed by intracellular chromophores. Cell membrane permeability increases, which causes physiological changes to occur. These physiological changes affect macrophages, fibroblasts, endothelial cells, mast cells, bradykinin and nerve conduction rates. The clinical and physiological effects are obtained by the way in which tissues absorb laser radiation. This tissue absorption depends on the wavelength of the beam itself and the power to ensure that the laser energy reaches the target tissue at the necessary clinical levels. The improper wavelength of laser light would not penetrate into the tissue to reach the target area. Furthermore, even if one has a laser with the proper wavelength, if the device does not have enough power to drive the energy into the tissue, the target area may not realize the potential benefits. Each type of laser emits light at a very specific wavelength which interacts with the irradiated tissue. It also acts in particular with the chromophores present in the tissue, but in a different way. A chromophore, intrinsic or extrinsic, is any substance, colored or clear, which is able to absorb radiation. Among the endogenous chromophores are water and hemoglobin, nucleic acid and proteins. Among the exogenic chromophores are porphyrins and hematoporphyrins, which are injected into the organism. These are described as photosensitizers because they fix themselves to the tissue making it photosensitive at specific wavelengths.

How deep into the tissue can laser light penetrate?

The level of tissue penetration by the laser beam depends on the beam's optical characteristics, as well as on the concentration and depth of the chromophores, which are absorbed at different percentages according to the laser light's wavelength. For instance, water absorbs almost 100 percent of the laser irradiation at 10,600 nanometers, the wavelength of a CO 2 gas laser. That is the reason why this type of laser wavelength is used in surgical applications. Other factors affecting the depth of penetration are the technical design of the laser device and the particular treatment technique used. There is no exact limit with respect to the depth penetrated by the light. The laser light gets weaker the further from the surface it penetrates where eventually the light intensity is so low that no biological effect from it can be measured. In addition to the factors mentioned, the depth of penetration is also contingent on tissue type, pigmentation and foreign substances on the skin surface such as creams or applied oils. Bone, muscles and other soft tissues are transparent to certain laser lights, which means that light can safely penetrate these tissues. The radiation in the visible spectrum, between 400 and 600 nanometers, is absorbed by the melanin, while the whole extension of the visible which goes from 420 to 750 nanometers is absorbed by composite tetrapyrrolics. In the infrared, which covers about 10,000 nanometers of light spectrum, water is the main chromophore. Fortunately, there exists a narrow band in the light spectrum where water is not a highly efficient chromophore, thereby allowing light energy to penetrate tissue that is rich in water content. This narrow band, which extends approximately from 600 to 1,200 nanometers, is the so-called "therapeutic window". That is the reason why the lasers in the market today have wavelengths within the 600-1,200 nanometer limit. The penetration index is not at the same level throughout the therapeutic window. In fact, lasers in the 600 to 730 nanometer range have less penetration and are more suitable for superficial applications such as in acupuncture methodologies.

Light emitting diodes (LED) are tiny light bulbs that fit easily into an electrical circuit. But unlike ordinary incandescent bulbs, they do not have a filament that will burn out. They are illuminated solely by the movement of electrons in a semiconductor material. LED's produce incoherent light just like an ordinary light bulb. Light from LED's have very little tissue penetration compared to laser light. By applying the first law of photochemistry (Grotthus-Draper Law) which states that light must be absorbed by a molecule before photochemistry can occur, one can immediately conclude that light from LED's will work only on skin level conditions. For conditions deeper than skin layers, one must choose laser.

Yes. Laser therapy is a drug-free, non invasive therapy with superior healing ability. However, since lasers produce a high intensity light, one should never shine the laser directly into the eye. Further it is recommended that the laser device not be used directly on any neoplasmic tissue. Pregnant women should refrain from laser therapy applied directly to the abdomen. Also people with pacemakers should not use laser therapy near the heart.

What is pulsed electromagnetic therapy?

Magnetic fields play a key role in biological life. A magnetic field is created when a conductor is crossed by an electrical current. Magnetic fields arranged around single conductors are summed in a coil producing a density of magnetic force lines. If current produced in this way flows in pulses, then a pulsed magnetic field is created. In the bioenergetic and chemical terms of an organism, the essential concept of magnetism is not the magnetic load, but the energy-rich dipole which is surrounded by a magnetic field and whose transformation and exploitation for the production of energy in the organism is highly significant. The most important effect from pulsed electromagnetic fields (EMF) therapy is found on the cellular transmembrane potential (TMP). It is known that damaged or diseased cells present an abnormally low TMP, up to 80% lower than healthy cells. This signifies a reduced metabolism, impairment of the electrogenic sodium-potassium (Na-K) pump activity, and therefore, reduced ATP production. In a nutshell, the TMP is proportional to the activity of the Na-K pump and thus to the rate of healing. Healthy cells have TMP voltages of 70 to 100 millivolts. Due to constant stresses of modern life and a toxic environment, cell voltages tend to drop as we age or due to illness. As the voltage drops, the cell is unable to maintain a healthy environment for itself. If the electrical charge of a cell drops to 50, the patient may experience chronic fatigue. Electromagnetic therapy with the Maxi provides one effective way to affect healing rates by increasing cellular TMP. 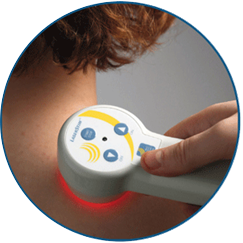 Does laser therapy cause heat damage or cancer in the tissue?

Absolutely not. The average power and the type of light source (non-ionizing) laser therapy uses do not permit heat-damage or carcinogenic (cancer-causing) effects. Due to increased blood circulation there is sometimes a very minimal sensation of warmth locally.

Therapeutic lasers are getting better every year. New lasers have entered the North American market that provide deeper tissue penetration, higher power densities and reliable electronics to achieve better clinical outcomes. The trend has been to increase power density and dose, since these have been shown to produce better clinical outcomes. In the case of superficial target tissues, clinicians have several laser options to consider. Underpowered lasers currently available in North America do not deliver the needed light energy to treat tissues beyond a few centimeters. 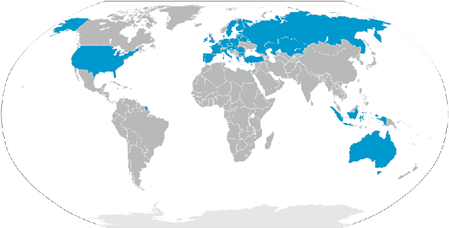 Multi Radiance Medical is an international corporation with a presence in over 30 countries and has been servicing customers for 20 years.

Devices have regulatory approvals and are available in over 30 countries of the world with ongoing expansion worldwide:

SOLON, Ohio (April 28, 2011) - Getting back on the field quicker and healthier is what sports injury rehabilitation is all about. Leading major sports athletic trainers credit new benefits made possible with laser therapy equipment by Multi Radiance Medical with getting players back in action sooner.

Multi Radiance Medical also provides portable laser therapy equipment for treating injuries during play. The MR4 ACTIV TM laser delivers 15,000 mW of super pulsed laser power and lasts up to 18 hours on a single charge. The unit is used by more than half of the National Hockey League's teams.

We look forward to hearing from you.